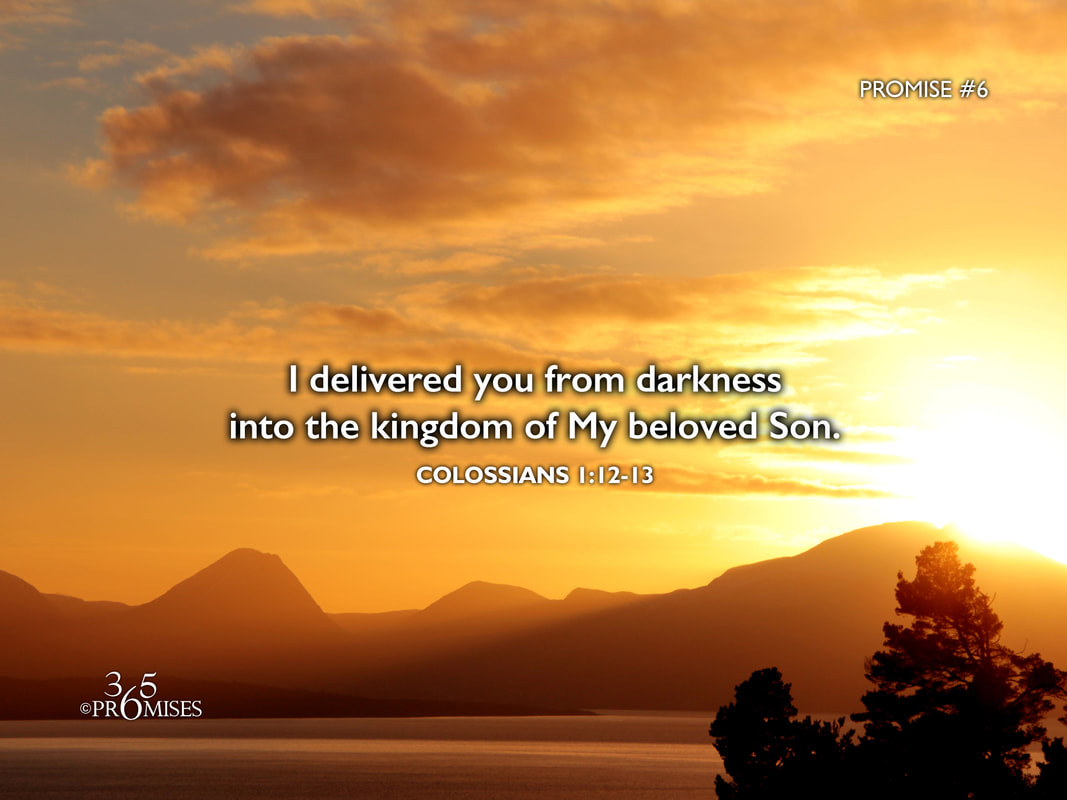 DOWNLOAD PHOTO
Promise #6:
I delivered you from darkness into the kingdom of My beloved Son.

Colossians 1:12-13 (WEB)
12 giving thanks to the Father, who made us fit to be partakers of the inheritance of the saints in light; 13 who delivered us out of the power of darkness, and translated us into the Kingdom of the Son of his love;

Each one of us were once held captive by the power of darkness before we were set free by the power of Christ and brought into His kingdom. For all who have said 'yes' to Jesus, our old life is now in the past tense and our new life in Christ is our present reality... Whether we feel like it is or not.

May the Holy Spirit give us revelation today to know that we have already been translated into the kingdom of our Elder Brother. The power of darkness has no more hold on us because of our royal position in Christ. We now live in an upside down kingdom, where the last will be first, the weak will be strong, and the poor will inherit the riches of our Father's kingdom.

I pray that every believer will echo the prayer that Paul prayed in Ephesians that our God and Father would give us the spirit of wisdom and revelation to know Him better. May the eyes of our hearts would be opened so that we could really see the hope of His calling and our glorious inheritance in the saints!

Ephesians 1:15-23...
15 For this cause I also, having heard of the faith in the Lord Jesus which is among you, and the love which you have toward all the saints, 16 don’t cease to give thanks for you, making mention of you in my prayers, 17 that the God of our Lord Jesus Christ, the Father of glory, may give to you a spirit of wisdom and revelation in the knowledge of him; 18 having the eyes of your hearts enlightened, that you may know what is the hope of his calling, and what are the riches of the glory of his inheritance in the saints, 19 and what is the exceeding greatness of his power toward us who believe, according to that working of the strength of his might 20 which he worked in Christ, when he raised him from the dead, and made him to sit at his right hand in the heavenly places, 21 far above all rule, and authority, and power, and dominion, and every name that is named, not only in this age, but also in that which is to come. 22 He put all things in subjection under his feet, and gave him to be head over all things for the assembly, 23 which is his body, the fullness of him who fills all in all. (WEB)
SUBSCRIBE TO FREE DAILY EMAILS