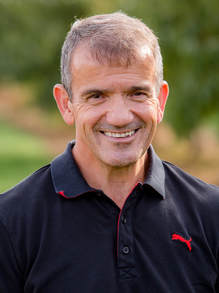 Barry Adams is the author of all the resources on this website. He has written all of the daily devotionals and he has taken all of the photos.

Barry and his wife Anneliese have been married for 36+ years and have 3 adult children, Kristin, Steve and Candice as well as an amazing son-in-law Nick and three spectacular grandchildren, Riley, Zoey and Levi. Born and raised in St. Catharines, Ontario, Canada, Barry came to faith in Christ at 15 years of age.

He graduated high school at 16 years old and started a 19 year career in his hometown's daily newspaper in the advertising department. It was during this time, that he developed a heart to use secular media to share the good news of Christ. He left his newspaper career in 1996 with his last position being Director of Advertising for The St. Catharines Standard.

A brief 3 1/2 stint in full time pastoral ministry followed at which time he came into a life-changing revelation of the Father heart of God in 1998 through the ministry of Jack Winter and James Jordan. This new encounter with the extravagant love of God completely changed his life causing him to write a sermon illustration he called 'Father's Love Letter' that he presented in his home church in January 1999.

After a very emotional response from the congregation to this very simple PowerPoint presentation, Barry decided to convert this 8 minute multi media expression of God's heart into a video format which he streamed on his new website, FathersLoveLetter.com

Never in his wildest dreams would he have thought that this compilation of paraphrased Bible passages would be experienced by millions of people around the world and be available in over 100 languages.  As a result of the overwhelming response, Barry asked his home church to release him from pastoral ministry so he could focus all his efforts on sharing the Father's love.

In March 2000, Barry and Anneliese founded Father Heart Communications to help facilitate the growing demand of their new international ministry endeavors. In the past 18 years, Barry has personally visited every continent and continues to develop new expressions of His Abba's heart through every available Internet technology.

Barry's passion continues to be to use every form of technology to communicate the extravagant love of God to people around the world. Barry's sweet spot for ministry is seeing the lights come on in people's hearts when they begin to grasp that God really, really loves them and He is the Father they have been looking for all their lives. He is also very passionate about helping grown ups change and become like little children again so they can enjoy the immeasurable vastness of their Heavenly Father's Kingdom.

It has now been over 20 years since Barry's life was changed through a hug from a man named Jack Winter. After having millions of people visit their websites and countless testimonies of people telling how the Father's love changed their lives, Barry and Anneliese are convinced that the words that Philip and Thomas said to Jesus in John 14:8 are the cry of every human heart. .. Show us the Father and it will be enough.
SUBSCRIBE TO FREE DAILY EMAILS